Hey guys! It’s been a while again since I last wrote a blog entry. I hope you had a good start into the new semester and didn’t freeze to death in one of the numerous snow storms. But considering that each of them only lasted for about two hours, chances are very low, I guess. 🙂

Guys, I have a new passion: pub quizzes. I don’t understand at all why I hadn’t been to a single pub quiz during the last semester – I mean, they are SO MUCH FUN! I’ve been to several pub quizzes now, and I’ve actually won three with my respective teams. The secret is that you always need at least one British person in your team to answer all the UK-related questions, because to be honest, we, the students from other countries, don’t have a clue about when it comes to this. 😀

I just wish we had more pub quizzes or pubs in general in Germany, and I’m definitely going to miss them when I’m back.

In the first week of this semester, I’ve been to another trip that was organised by the International and Exchange Student Society Edinburgh. We went to St Andrews and I have to say that it was one of the most peaceful and calming places I’ve ever been to! I felt so relaxed for the entire day, which is kind of surprising considering that me and a girl I met on the trip almost died underground. 😀 We visited the castle together, which was actually more of a ruin – but a really nice one! – and one part of the castle consists of an underground corridor. Now, when I hear the word “underground corridor”, I think of a real corridor, as in a house, in which you can just walk around. This is NOT what the St Andrews Castle underground corridor is like! It’s actually so narrow that you cannot walk but rather crawl, and I don’t think that you can actually enter it if you’re taller than 1,80 m. But there are no signs or security guards who prevent you from going inside, so we just entered. I first thought that only the first part would be narrow and that we would be able to stand up after a while. But what happened instead was that we had to go down a latter and another few metres of corridor – and a second latter. But the best part was that we both thought we would reach an exit at some point, but instead, we were suddenly facing a wall. At this point, we both suffered from a slight panic attack when we realised that we would have to go back the exact same way we had gone down. And since nobody else from our group was around in that moment, no one would have heard us scream for help anyway. So, we were really brave and climbed up the entire corridor again. I still cannot believe we survived this, but we still had a great day. 😀 We later went on the cathedral tower, which was another terrifying experience, but the beautiful view you can see in the photo was definitely worth it. 🙂 We also went to the café where William and Kate (apparently) had their first date, which was lovely, and after that, we took a nice little walk by the sea. St Andrews is such a nice place and I really want to go back there someday.

Baby, you can make it as the underdog! 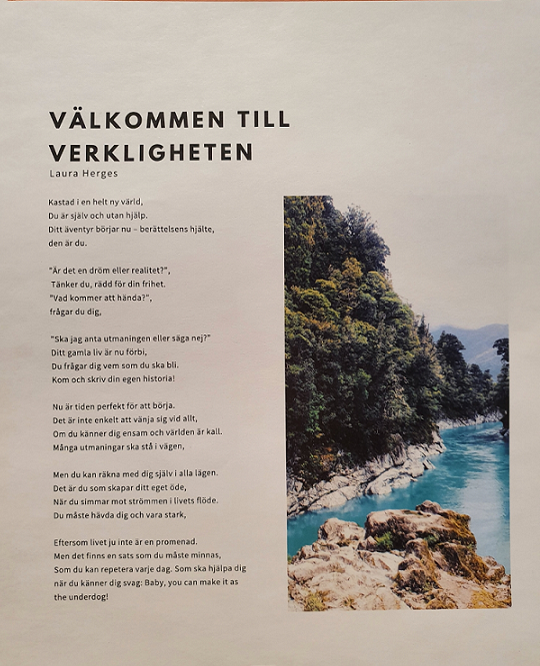 Another fun experience was the launch of the Babble magazine, which I wrote a poem for. I wrote the poem, which you can see in the photo, in Swedish, but I’m also going to provide you with a little translation into English (you guys know that I’m not a native speaker of either of these languages, so please don’t be too strict with me :)):

It’s a whole new world you are thrown into,

Without any help and on your own.

This beginning adventure belongs to you,

And the hero of this story are you alone.

“Is this a dream or is it reality?”

You think, afraid of your new liberty.

You ask yourself what the future will bring:

“Should I take this challenge or quit this whole thing?”

Your old life is now in your past

You ask yourself who you’re going to be

Come and write your own history!

It’s not easy to settle in at your new home

When the world is cold and you feel alone.

Many obstacles will stand in your way,

But you can count on yourself, every single day.

It’s you who creates your own destiny.

And when you swim against life’s stream,

You have to be strong and fight for your dream.

Because life’s by far not always easy.

That you can repeat every single time

When you feel weak and out of luck:

Baby, you can make it as the underdog!

I was inspired to write this poem when I met many freshers during Welcome Week (which you guys already read about a long time ago :)). I had a flashback to the time when I started studying a while ago, and I thought of this feeling of being thrown into a whole new world. For me, this new stage of life was always about becoming a stronger person and realizing that we are often capable of doing things that we actually fear. The last line is a quote from a song called “Underdog“ by Banks, one of my favourite singers, whose concert in Glasgow you could also read about in one of my previous posts. It has become my life motto, since it expresses that no matter who you are or where you come from, you can achieve anything when you believe in yourself – even if you think that you are the underdog. I hope you guys like it!

I definitely think that the Babble magazine is a great thing because it gives people the opportunity to be creative in the language(s) they learn to speak, which is really, really cool!

Aaaand I’ve been to another trip, this time I went back into the Highlands to visit Glencoe and the Glenfinnan Viaduct – which is famous for being the bridge over which the Hogwarts Express goes in the Harry Potter movies.

I have to say first that I’m not a huge Harry Potter fan. Please don’t judge me, but I’ve only seen the movies and not read a single book. That’s the reason why I wasn’t particularly good at the Harry Potter quiz we took in the bus. 😀

But you know what? That didn’t matter at all, because the Highlands are always gorgeous, and I had a great time anyway! The landscape is just breathtakingly beautiful, and I don’t think that you have anything like that anywhere else in the world. Since I’m not able to sleep in any moving vehicle, I didn’t close my eyes for one second on the 4-hour-busride, and I fell into a coma right when I got home, but it was all worth it! The Highlands are always worth it, and although you can definitely take great photos there (like the title image for example ;)), pictures will never be able to capture the magic of this place. It was a great experience again, and if you haven’t been to the Highlands yet, DO IT! It’s obligatory for anybody staying in Scotland! 🙂

I hope you guys are having a good time right now, although the strike and Corona aren’t making it easier – but as always, I just want to tell you that you should always try to be optimistic and make the best of any situation – this place is so beautiful, it would be a shame to be sad here! 🙂