The hardest part of the semester is done, and it finally feels like we’re able to breathe again. I’m daring this broad generalisation because I haven’t met anyone yet who actually enjoyed the last two weeks of essay deadlines. We all had to hand in assignments, to take tests or midterm exams, and slowly but surely, the library starts to spit out all of those pale and confused looking students who can’t believe they haven’t seen anything except for a grey desk and the library café’s pink and green, disposable University of Edinburgh to-go cups for 168 hours straight. When you’re sleep-deprived enough to mindlessly stare at the brown-golden leaves tumbling from the trees in front of the library windows because you can’t come up with another argument why the kilt is so much more than just a well-knitted lie for tourist shops to make money, it seems impossible that November is almost over. Another month gone down the leave-covered lanes cutting through the Meadows and once again, you feel like you’re missing way too many goodbyes. With my departure from Edinburgh postponed for now, the pressure of squeezing all the things I want to do into the few weeks left starts to lift off as well. But there was one place in particular which has been on my to-travel list from the first week on: Dunnottar Castle.

With its roots tracing back to the 4th century, Dunnottar Castle is one of the most important and impressive historic sites in Scotland. Located half an hour by car South of Aberdeen in Stonehaven, Dunnottar Castle towers over the North Sea as if marking the end of the world – which, in medieval times, it might as well have been at some point. Without diving too deep into the castle’s complex history, it must be mentioned here that during its more than 1,600 years of existence, it was attacked by Vikings, destroyed by the national hero William Wallace himself, visited by Mary Queen of Scots, offered a home to the Scottish Crown Jewels, and was eventually sold and saved from ruin.

To those living outside of Scotland, it might be more familiar for offering inspiration for Disney’s and Pixar’s co-production Brave, the story of a young fictional Scottish princess, Merida, which vaguely resembles the ghost of a young woman in a green dress who has been reportedly spotted by several visitors haunting the castle to this day.

The university’s International and Exchange Student Society offered a trip to Dunnottar Castle and the nearby city Aberdeen, which would have been my next stop for an internship had fate not had other plans. And that’s why I find myself sitting on a bus at quarter to eight on a misty Saturday morning once again, bound for the North. It takes roughly one and a half hours until the snow-covered Highlands float by the windows in the distance like the mirage of the clouds above. Slowly but surely, the tiredness gives way to excitement. When the bus finally comes to a halt on a small car park near the sea, we’re more than ready to jump out and make a beeline to the cliffs because we’ve only got an hour to explore the historic grounds of Dunnottar Castle. Neither the slippery steps nor the freezing wind can stop us now.

As it turns out, one hour isn’t nearly enough time to explore everything, but with the kitchens, cells, and king’s quarters covered, I think we made the most of our stay. We make it back to the bus two minutes past the agreed meeting time, but even to our own surprise, we’re not the last ones to arrive. If you travel to Dunnottar Castle and are not the quickest on your feet, I recommend taking half a day to truly enjoy your stay here. Unfortunately, the castle is not easily accessible for people with walking disabilities which was a factor that, sadly, wasn’t considered in the planning of the trip which posed serious problems for some participants.

Nonetheless, we continued our trip now heading towards Aberdeen, the third largest city in Scotland with a population of 196,670 residents. While I’ve always liked the warm glow of Edinburgh’s historic Old Town, Aberdeen is the exact opposite of that. The majority of the city centre was built from mid-18th century to mid-20th century in grey Granite which is why Aberdeen is also nicknamed The Granite City. While it is said to sparkle in the sun, we were unfortunate enough to arrive in Aberdeen on a generally grey day which did very little to lift the glooming, intimidating atmosphere hovering over the pointed tips of Aberdeen’s Marischal College (see photo above). Aberdeen, in direct comparison with Edinburgh, feels surprisingly cold.

We were dropped off near the city centre to have some lunch, but the organisers failed to mention that the main attractions, the historic University of Aberdeen and the Old Town, were a good 45-minutes’ walk away. If we hadn’t checked the distances on our phones while chewing on some deep-fried pub food, we wouldn’t have made it in time to see everything we originally came for. With a burger-and-chips-heavy stomach, we hurried from one end of the city to the other as the sun began its slow decent towards an early winter sunset. But despite our fear of walking into a trap of disappointment, our extended stroll was worth the breathlessness and sweat. 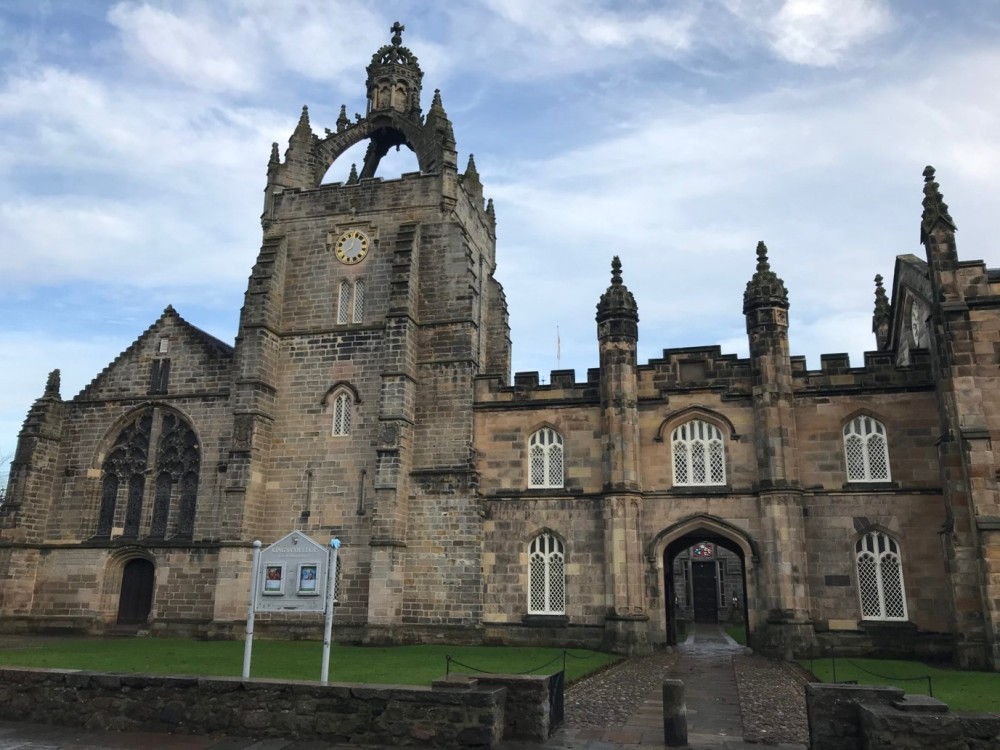 Coming from Edinburgh, the city has obviously spoiled us with impressive medieval architecture and beautiful sceneries. So much so, as we now come to realise, that we’re not that impressed by the few streets the Aberdeen Old Town consists of. Without a question, the university is a beautiful place that is well worth a visit if you’re in town and the narrow cobblestone streets winding through the rows of small houses which seem to have been stables at some point in the past give off the same nostalgic aura that you associate with old Oxford student films. But that alone does not make the long drive from Edinburgh worth a day in the North. I’m certain that Aberdeen has much more to offer than the short glimpse we’ve had – if only we’d had more time exploring it instead of spending it walking through the less impressive parts of town.

And as we cross the Queensferry Bridge again hours later after the sun has long set and the first lights of Edinburgh sparkle in the distance, I can’t help but smile at the thought of how much it feels like coming home. And how lucky I am to call this wonderful city just that for a little time longer.